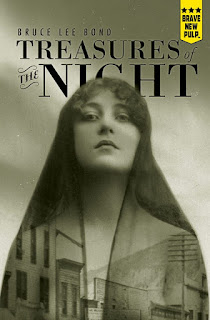 A vibration erupted
beneath his feet and his mukluks slid from under him. There was a loud crack as
he landed. Pete caught his breath and spread his weight out, staring at his
reflection in the dark water beneath treacherously thin ice.
Two red eyes stared
back at him from a face white as the moon. Bubbles of breath streamed from a
pink mouth to weave amongst black hair dancing in the current. The hair on the
back of Pete’s own neck danced. He rose to his knees with his breath again
catching in his throat. Pete put mittened hands on the ice of the Yukon, and
gazed at the face of a woman more beautiful than life itself.
Help me!
From Treasures of the
Night by Bruce Lee Bond
An abused goodtime girl staggers into her friend’s crib,
awaking a slumbering goddess in Dawson City who seeks refuge during the
Klondike gold rush. Lorelei, daughter of Lilith, seeks out a young lover Joseph
and changes the lives around her including Klondike Kate, Swiftwater Bill
Gates, Gussie Lamore, Arizona Charlie Meadows and various goodtime girls. Lorelei
kills the stalker of young Alice Mary, beginning a series of events that brings
her teenage wards into full knowledge. Alice Mary kills her next stalker
herself.
Joseph and Alice Mary flee for the Fortymile Country by sled.
Lorelei takes the wife of Wyatt Earp for a lover in Nome while guiding the
teens through animals, dreams, and the Indian Stick Sam. Alice Mary kills three
outlaws and she and Joseph become lovers before they’re captured for trial.
Three whores start a fire and Lorelei returns to rescue Alice Mary from a
burning building at Fort Herchmer but disappears in the inferno. The kids hide with
the prostitute the Oregon Mare, and Lorelei emerges a burnt corpse, takes a worthless
man’s life to regain her form, and spirits the young couple out of town to
begin a new life.
Alaskan Author
Published by California Press
Oakland, CA, November
12, 2015. With his second novel through Montag Press, Bruce Lee Bond brings
back the mysterious and powerful daughter of Lilith known to a lucky few as
Lorelei. Treasures of the Night is a
jaunt through the Klondike Gold Rush area from Dawson City to Nome, Alaska.
Along the way Lorelei influences the lives of many historical figures including
Klondike Kate, Swiftwater Bill Gates, the Oregon Mare, Wyatt and Sadie Earp,
and many more. Her long life and memories from her ancestors allow her to
impart time-honored wisdom to the outcasts as well as the richest and most
famous people in the region.
Bruce Orton writing as
Bruce Lee Bond (birth name) attended SF State, the University
of Oregon and the University of Alaska. He studied with a Lakota medicine man
on the reservation at an early age. He hitchhiked and took ferries to Alaska in
1974 where he has spent most of the ensuing years, and built a cabin on a fjord
that summer. He care took the Kilcher homestead out of Homer in the early
eighties and build a log home in the Talkeetnas in 1984 where his three
children came into life. He has short stories published by the University of
Alaska and the Anchorage Press as Bruce Orton, and as Bruce
Lee Bond with Fox Spirit Books out of London, Sirens Call, Cwich Press,
Midnight to Dawn, James Ward Kirk Anthologies, and novels published by Montag
Press.
On Goodreads
Soft cover or e-book on Amazon
Views: 64