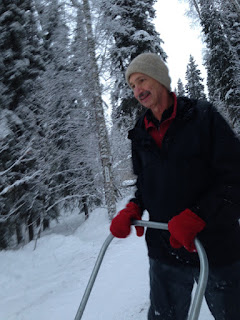 It’s been snowing a lot in Fairbanks these past few days.  Which means I’ve been scooping a lot.  That’s how we clear our driveway of snow, the
scoop being mostly made of a galvanized sheet of steel, fabricated right in the
shop of one of the oldest businesses in Fairbanks, Wilbur Brothers Sheet Metal.
It is a thing of beauty, elegant, simple, efficient, all a person could want a
human-powered machine to be.  Empty, it
slides effortlessly across the snow.
Full, well, really full of wet snow on the steep pitch of the driveway,
it’s a lot to manage, but a person must persist.  “… it’s a good life and a good world, all said and done,
if you don’t weaken,” Arthur Seaton tells us in Sillitoe’s Saturday
Night and Sunday Morning.  And he’s
right about that.
Margot and I have a longish driveway which means that on a
good day with only light snowfall and fluffy snow, I can clear the driveway in
two hours.  Today with heavier, deeper
snow, it took me around three and a half.

I’m telling you this on the way to an explanation because
you’re probably already wondering why I would do such a thing, spend the better
part of the mid-morning to early afternoon scooping snow.  There’s got to be an easier way, right?  I could hire one of the guys running up and
down the road with a blade on the front of his beat up truck, or call the
number on the cardboard sign stuck in the snow a little way down the road.
Except there is a certain pleasure in scooping, a time of
enforced quietude, and lots of time simply to think.  I can’t imagine a life without long blocks of
time to think, to let my mind ramble until it comes upon something worthwhile,
something useful, something maybe even worth sharing with others—an idea worth
writing about.
That’s what I’m thinking about just now:  What’s worth writing about?  I’m not sure there’s any question more
necessary for a writer to ask himself or herself.  This question lies at the core of who we
are.  It’s the question that must compel
us to write in the first place.
Isn’t it?  Sometimes I
worry that it’s not.  When I began graduate
school almost 40 years ago, one of our teachers asked us if we wanted to be
writers or if we wanted to write.  This
was not some tricky Zen koan, it was a challenge to us to confront ourselves
and ask ourselves what had caused us to drag ourselves from all parts of the
continent to be in that class where every week we were forced to listen to a
litany of our inadequacies as writers.
I’ll admit I thought this whole writing thing was going to
be easy.  I was a clever guy, had a way
with words, could turn a phrase, come up with a funny one-liner.  I had some notion that was enough, that’s
what it took to be a writer, the very kind of person my teacher may have had in
mind when he dismissively said the word “writer.”  I had a lazy brain.  Maybe I’d taught it to be lazy when I was a
boy mowing lawns, pushing my mower just as I do my scoop, and letting my mind
drift along in various fantasies of me as a basketball standout, a cool guy with
pretty girlfriends.  The usual stuff.
I didn’t like the way this man taught us, the belittling
mockery he made us suffer class after class.
But his question continues to hit me hard: did I want to be a writer or
to write?  At a party for a guest writer,
he said, “You’ve been married, haven’t you?”
That was my dark secret, something I’d shared with none of my new
friends.  It represented my first major
failure in adult life, and I’d done my best to put the whole episode behind
me.  Maybe it was the last thing I’d have
chosen to write about.
I left the party angry and humiliated.  But really (and I’m sure you’ve gotten here
ahead of me if you’re any kind of thoughtful reader at all) wasn’t this the
question in my core that had to be dug out and brought into the light? In that
moment, I considered that failure in my life, and saw that taking it on in
writing would make me confront it and myself—the choices and mistakes I’d
made—and discover some truths about myself, some truths a reader might find useful
to consider, too.  I might turn that
terrible event into something worth writing about.   And worth reading.   And
worth the resulting failure, a failure to find resolution in any wholly
satisfactory way.  The question was too
hard then, and maybe it still is.  That’s
a big part of what makes it worth asking.
And that’s how one question can only lead to the next, how one story
only creates the origins for the next.

I’m not suggesting that writing is a cheap form of therapy,
nothing of the kind.  I am saying,
though, that writing is about confronting the hardest questions we are able to
bring to bear on the page, matters of life and death as the cliché would have
it.

When I’m out there scooping snow, I am looking for those
hard questions.  If I’m lucky I dredge
something up.  There are days when I just
don’t find them, when I still let my mind flow along its lazy familiar
paths.  But there are days, and maybe
these are the most important days, when the questions come looking for me and
won’t let me get away.

Frank Soos has lived in Fairbanks for almost 30 years, for the past eleven with wife Margo Klass. His next book of essays, Unpleasantries, will be published by the University of Washington Press in the spring of 2016.  He is the current Alaska State Writer.
Views: 34