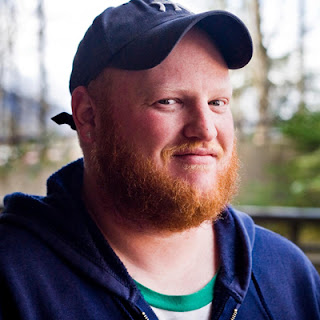 Everyone has a “what I’m doing in Alaska” story: I got a
job; I met someone; I watched too much Discovery Channel; I crossed a land
bridge from Asia sometime between 60,000 and 50,000 BCE.
But nobody moves here to become a comedy writer. Nobody, except
me.
You see, I spent most of my 20s trying to, but ultimately not,
make it in the New York comedy scene. Back around the turn of the millennium,
for instance, I was shortlisted for a staff-writing position on The Daily Show with Jon Stewart. Once, I
even auditioned to host a cable network reality series (guess how the screen
test went).
Point is, eventually I grew tired of taking that particular
beating. I’d also just finished my MFA in fiction and thought I might enjoy getting
rejected by literary agencies for a change. Plus, my fiancé was stating an internship
in Palmer, Alaska (of all places) and I really didn’t feel like getting married
over Skype.
And so, like our pioneer forebears, we packed up the old Subaru
Forester and headed north, to the future. Not that the Mat-Su Valley was particularly
futuristic. I mean, the first rental properties we saw didn’t have heat,
running water or electricity.
Eventually, we found a slightly more modern place, in that it
had utilities but no street address—just “behind the barn near mile 1.5.” Also
included: a spare room for a home office with a breathtaking view of Matanuska
Peak. Back in Brooklyn, by contrast, my workspace doubled as a clothes closet;
my desk looked out on an airshaft.
Inspired by these new Alaskan digs, I decided against
looking for gainful employment. I set off to write my first novel. Well, you
know what they say: the road to hell is paved with plans to write your first novel.
Ten years later, I’m still re-working the opening sentence.
But of course there’s a silver lining (actually, due to
statewide budget cuts, all linings are now silver laminate). While my fiction
career has sputtered since moving to Alaska, in the meantime I’ve written hundreds
of thousands of words of comedy. Maybe a million. Maybe more. And some them
were even funny.
What started as a means to procrastinate quickly became my
primary avocation—not only is comedy more fun to write; absent the emotional,
psychological and dramatic elements of fiction, it can be a whole lot easier.
Soon, I began writing “Slack Tide,” a bi-weekly column in
the Juneau Empire, which, after seven
years, remains my favorite regular gig.
I also started picking up table scraps from friends who
stuck it out in New York. These were often tricky assignments, for discerning
clients, on tight deadlines. That’s why no one else wanted them.
As a freelance comedy writer—actually, as a freelance anything
writer—you can’t decline any opportunities and you can’t fail, or you risk
never working again. And that means having to get a real job. Shudder.
Case in point: several years ago, out of the blue, a
publishing house asked me to step in and write a page-a-day calendar, at least
two jokes per page, counting down to the 2012 apocalypse predicted (spoiler
alert: this apocalypse didn’t happen). A writer for Conan O’Brien pitched the idea
when Conan went off the air. Except Conan went back on the air—after the
publisher not only greenlit the project, but featured it prominently in advance
marketing materials. The editor called me in early November; she needed the
manuscript right after New Year’s. Oh, and my wife just gave birth to our
second baby.
“No problem,” I said like I conducted this type of business
every day.
So there I was, suddenly facing down a 60,000-word project—60,000
words that needed to sound as if they sprang forth from the MacBook of a Conan
staffer.
I won’t say it wasn’t difficult. I gave myself carpal tunnel
and almost got divorced, but I finished. Of course, I had to pull out every
trick I knew, from suggested iPod playlists—e.g. “Closing Time” by
Semisonic,  “Pop Goes the World” by Men
Without Hats—to fake ice cream flavors—e.g. “Fudgement Day,” “Almondgeddon,” “Four
Horse-mint of the Achocolatechypse.”
If the experience taught me anything, aside from asking for
more free copies next time, it’s this: while fiction writing is an art, comedy
writing is a craft. It’s the literary equivalent of basket weaving. Once you
learn proper technique—and then refine it through endless practice—you can
crank out as many jokes as you like, about almost anything. Even the
apocalypse.
As many tips, tricks, approaches, strategies and vaguely
coherent anecdotes as I can cram into three hours await those who attend my aptly
named 49 Writers Workshop, “Everything I Can Teach You About Comedy Writing in
3 Hours.” (Registration here.)
Not to brag, but I hear I give good class.

GEOFF KIRSCH is a Juneau-based writer and humorist. His work has appeared in/on Comedy Central, Huffington Post, the WGN America cable TV network and the Alaska Dispatch, among others. He is also the author of Run For Your Life! Doomsday 2012! published by Workman. “Slack Tide,” his long-running regular column in the Juneau Empire won a 2015 Alaska Press Club award for humor. But enough about him — let’s talk about you…