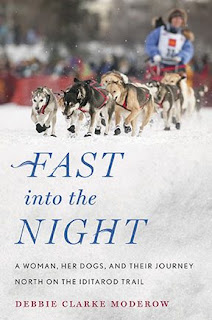 Juliet and Kanga watch me. Standing in lead at the front of the line, they turn and follow me with their eyes as I step onto the runners of my dogsled. For the past fifteen minutes they’ve been clamoring to go—yapping and singing for the night trail and the star-speckled sky. Now they tremble with quiet anticipation. They know I’m about to reach for the rope and set us free.

I grab the end of the slipknot. Give it a tug. Juliet and Kanga leap, and so do the others. My ten huskies and I streak from camp in bright moonlight, slipping through shadows of gangly black spruce that line the outgoing trail.

For the first time all season conditions are perfect for mushing. It’s ten degrees below zero with eight inches of fresh snow…

(from Fast Into the Night: A Woman, Her Dogs, and Their Journey North on the Iditarod Trail by Debbie Clarke Moderow)

Debbie Moderow was not the typical musher in the Iditarod. At age 47, this mother of two found herself less than 200 miles from the finish line, on the unfamiliar arctic sea ice, when her dogs decided they didn’t want to run anymore. After running well for more than a week, her huskies balked. For Moderow, the sting of not completing the race was nothing compared to the disappointment she felt in having lost touch with her dogs.

Fast into the Night is the gripping story of Moderow’s journeys along the Iditarod trail with her team of spunky huskies including Taiga, Lil’ Su, Piney, Creek, Nacho, Zeppy, Juliet, Sydney, and the headstrong leader, Kanga. The first failed attempt crushed Moderow’s confidence, but after reconnecting with her dogs she ventured again to Nome, pushing through injuries, hallucinations, epic storms, flipped sleds, and clashing personalities, both human and canine. In the end, she prevailed. Part adventure, part love story, part inquiry into the mysterious connection between humans and dogs, Fast into the Night is a memoir about a woman, her dogs, and what can happen when someone puts herself in that place between daring and doubt—and soldiers on.

A soulful memoir of adventure and one woman’s love for her sled dogs. —Kirkus Reviews

In this well-crafted memoir, Debbie Moderow takes us on two compelling adventures, one outward, the other inward. Year by year, traveling by dogsled over the rugged landscape of Alaska, she develops the skill and stamina and courage required to finish one of the most grueling races on Earth. Those same strengths enable her to undertake inner journeys through personal and family history, through love and loss, until she comes to understand what matters most in life, both on and off the trail.
—Author Scott Russell Sanders

Debbie Clarke Moderow is a memoirist, with a particular affection for animals, their varied roles in our days and in our stories. She lives in Anchorage and Denali Park, Alaska, with her husband Mark and their team of 26 sled dogs. After growing up in Connecticut, Debbie graduated from Princeton University in 1977. She moved to Alaska in 1979, where she met Mark. With their two young children, Andy and Hannah, the Moderows delighted in developing the family’s backyard dog team.

Debbie ran the Iditarod in 2003 and 2005. In 2013, she graduated from Pacific Lutheran University’s Rainier Writing Workshop, with a MFA in Creative Writing. She is grateful to 49 Writers for fostering the literary arts throughout Alaska. “Fast Into the Night.” published by Houghton Mifflin Harcourt, is available in hard cover and eBook.