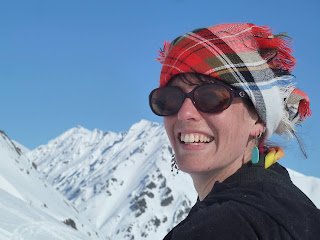 One of my favorite lines on craft comes from Rebecca Solnit:
“Any subject is a good enough starting point to travel any distance, toward any
destination.” Actually, she was speaking about Thoreau’s practice of giving his
politics and his leisure time equal narrative weight, of balancing berry picking
with jail time, but the metaphor lends itself to a discussion of craft. For
Solnit (and for me, because I am prone to blind and wholehearted agreement with
everything she says, and yes, I recognize this as a problem), this is a
template not only for a good essay, but a good journey. The distance between
the jail and the berry patch isn’t too great if approached right. This is true
for the distance between any two (or three, or six) points, geographical,
intellectual, or otherwise.
These ideas, inevitably, remind me of Eva Saulitis, who many
people carry in their minds and hearts this spring, and who helped me clarify
my thinking on metaphor, Solnit, and the infinite creative potential of
connecting any one thing to another. I was lucky enough to work with Eva as a
mentor during my time in the UAA MFA program, and she pointed me towards poet
Alicia Ostriker’s exploration of metaphor as defined by its Greek origins as “a
carrying across,” and then stood back while Ostriker’s essay blew my mind. “You
see the word on delivery vans in the dusty avenues of Athens, Metaphoros,”
Ostriker writes. “That which joins, that which announces connection, overlap,
shared essence, and yet retains the actual distance between whatever objects it
brings together.”
When the news of Eva’s death flooded Facebook, I was on a
bus in Antioquia, Colombia, looking at my phone. The news wasn’t unexpected,
but I still felt like the air had been sucked from the tourist bus twisting
down the switchbacks toward the city of Medellín, and when I breathed again it
was in tearful hiccups that made me grateful for the dark and the road noise
and that my partner had nodded off to sleep beside me. I scrolled through the
words and photos on Facebook in solitude. I felt profound sadness, but also a deep
connection and gratitude for the community that connects me with Eva, and the
technology that let me be part of that community despite the distance. I added
to the many Facebook posts reflecting on what she taught us, as a mentor,
writer, and human being. I thought of the ways what we learn is forever tied to
the people and the places we learn from.
I used eighty percent of my allotted international data in
that hour. It could not have been better spent.
“Te llevo,” one of the bus companies advertised, painted in
red and silver cursive across the rear window: “I’ll carry you.”  Across languages, the act of carrying is a
comfort: “We’ll carry you,” promised the Facebook prayers.
The bus lights switched on as we pulled into the terminal,
and we joined our friends on the platform. I clung to my buzzing phone like a
lifeline. That evening—the bus ride, followed by twenty minutes on the Medellín
metro and then the short walk up the steep winding streets to our seventh floor
apartment—I felt energized and exhausted, tied to the force of Eva’s life and
writing, and also reminded of the smallness of our own lives and journeys. “I died
and you died and the ever-moving earth continued on and on,” Eva wrote, and
elsewhere, “It is strange, and it is hard, but it’s comfort, and I’ll take it.”
I cannot think of that short journey without thinking of Eva.
Being distracted by social media while trying to negotiate public
transportation in a new country may not be much of a story (though it is a great
way to frustrate your travel companions). But once I explained my distraction, my
friend Molly asked me to share some of Eva’s writing. After dinner in the
apartment, we sat around the table, and I read what I could find online to an
audience of three.  The overhead lights,
which inexplicably dimmed every evening around eight, dutifully flickered to
half-light as I concluded.
In her essay “Wild Darkness,” Eva wrote of finding the
spiritual in “the undoctored real of the ever-dying world.” Any one thing can
carry meaning across to another.
Places have memories. It scares us
to think so. I am like bamboo, placeless,
transplanted somewhere new, staked
with foreign weather. But I
remember. We pause in our work, turn
our faces up to rain, our open mouths, one
after one. We think desire is enough.
It’s not. We build our privacies, impenetrable,
thin. We want places to remember us.
-From “Prayer 28,” Eva Saulitis
Erica Watson is an essayist living on the boundary of Denali
National Park. She completed her MFA in nonfiction at UAA in 2014. Her work has
appeared most recently in Pilgrimage,
The Fiction Advocate, and Denali
National Park’s Climate Change Anthology, and she is a recipient of a
fellowship to Fishtrap’s summer 2016 program. She will eventually update her
website at ericawatson.wordpress.com.
Views: 8