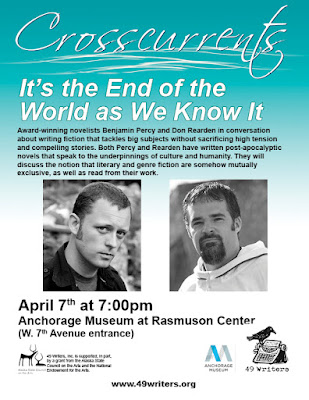 Are you going to be in Anchorage on Thursday, April 7? Why not join 49 Writers at 7pm at the Anchorage Museum, for a
Crosscurrents event entitled “It’s the End of the World as We Know It” featuring
award-winning novelists Benjamin Percy and Don Rearden.
Ben Percy and Don Rearden will discuss writing fiction that tackles big
subjects without sacrificing high tension and compelling stories. Both Percy
and Rearden have written post-apocalyptic novels that speak to the
underpinnings of culture and humanity. They will discuss the notion that
literary and genre fiction are somehow mutually exclusive, as well as read from
their work.
Benjamin Percy is the author of three novels, The Wilding, winner of the Society of
Midland Authors Award for Fiction, and the psychological thriller Red Moon, and The Dead Lands, a post-apocalyptic
reimagining of the Lewis and Clark saga. He is also the author of two
books of stories, Refresh, Refresh and The Language of Elk. His honors include a
National Endowment for the Arts, a Whiting Award, the Plimpton Prize, a
Pushcart Prize, and inclusion in Best American Short Stories.
Don Rearden is the author of The
Raven’s Gift and a produced screenwriter. His films have aired on
Showtime, TMC, and the Sci-Fi Network. His novella Permafrost Heart, will be published in Weathered Edge II.

There will be time for questions following the panel as well as an
opportunity to have books signed.

Later this week, I’ll have a report out from AWP, but since I got on the shuttle to the airport this morning in LA at 4am, I’m not coherent enough to regale you right now.

Hope everyone has a wonderful week. Get some writing done, okay?