Membership
Menu
I left McCarthy late last week, Juneau-bound for 49 Writers
meetings. With other stops along the way, it’s proven to be an inspiring
whirlwind. I head back to the Wrangells filled up by this huge place full of creative,
hardworking artists, where even the distances that separate us are wild and
beautiful.
I arrived in Anchorage after
the release party for the latest issue of Alaska Quarterly Review,
featuring full-color reproductions of Kes
Woodward paintings paired with poems by Peggy Shumaker. I also missed
the release party for Made of Salmon, an anthology that Nancy
Lord edited, which hit bookshelves about the same time the first kings hit the
Copper River delta.

I did make it to the awards ceremony honoring the 2016
Rasmuson Foundation Individual Artist Award winners, though. 36 artists
representing 11 communities in Alaska were chosen from over 400 applications.
Literary artists honored that night included Christy NaMee Eriksen, Bryan
Fierro, Joan Naviyuk Kane, and Seth Kantner. Visual artist Don Decker, this year’s Distinguished
Artist, gave a touching speech that spoke well to the richness of a creative
life. Patrick Race’s short film about him
is likely of interest to artists across disciplines. I attended the awards
ceremony with a former IAA winner, a visual artist. Often, I think I learn as
much about looking, seeing, and making from artists as I do from other writers.

First thing Friday morning, I joined board president and
writer (and Made of Salmon
contributor) Kirsten Dixon, and we left
a soggy Anchorage. The sunny weather we found down in the state capitol belied
the legislature’s failure to pass a budget after the four month regular session
that had just ended. Fortunately, our org’s own governance isn’t taking cues
from the State.
Amy O’Neill Houck
shuttled us to Joan Pardes’ home for
an entire day spent strategizing and planning. I’ll save the spoilers for
later, but suffice it to say, it was highly productive time well spent. We wrapped
the day up meeting with Juneau members in an informal meet-n-greet. The nearly-full
moon, one night shy of “blue”, and exquisite, fleeting alpenglow stopped us in
our tracks when we stepped outside after dinner. 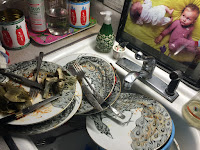 The next night in Anchorage, gearing up to boomerang back to
McCarthy, I enjoyed another dinner with writerly folks—this one hosted by Olena Kalytiak Davis. Though thoroughly
enjoyable and delicious, the night was tinged with a bittersweetness, knowing that
it would be the last time we gathered before poets and teachers Alyse Knorr and Kate Partridge leave Alaska soon. Both have been incredible members
of the 49 Writers community – as instructors, volunteers, and more – and they’ll
be missed. Maybe Olena and Jonathan J. Bower
and I can Skype them in next time (I jokes). Still, pre-emptive nostalgia
aside, it’s been a privilege to share time and space with them at all, and if
it’s one thing we Alaskans have figured out, it’s navigating vast geographies. I
know they’ll maintain ties with Alaska’s literary community. It’s also a
reminder that our writerly community actually extends far beyond the bounds of the
state itself.
I’m grateful for the communities that thrive here—or at
least survive, stubbornly or otherwise. I’m heading back out past the end of
the road knowing the camaraderie of time well spent with other poets, writers,
and artists will be folded into the time I spend alone. That solitude—and the work
accomplished therein—is sweetened by all the people inside it.
Views: 35