I laid down in bed early on Saturday, exhausted after a busy but memorable week without enough sleep. Instead of passing right out, though, my mind wouldn’t turn off. There’s plenty on it, lately, but I was surprised when the mental autopilot eventually swiveled to Roethke’s poem “The Waking”. It’s a villanelle that I love and have pretty well memorized, though it can be slippery. Maybe it turned up because Facebook had reminded me that it was the last night of National Poetry Month. I’d written a blog post here, in fact, that mentions the poem in that context a few years ago. Maybe now I associate National Poetry Month with that poem.

I thought that maybe if I tried to recite the whole poem a couple times in my head it’d lull me to sleep—better than counting sheep. In my foggy state, I couldn’t do it. The effort worked, though, and I fell asleep (ironically, I suppose, since the poem’s called “The Waking”) chewing on the recurring line “I learn by going where I have to go.”

To go was definitely the theme the next morning. It was May 1st, or May Day (not to be confused with mayday! mayday!). I would go to McCarthy that morning. I would also officially begin working as interim Executive Director of 49 Writers. It was the first time I’d woken up as a non-49 Writers board member since the organization began.

People traditionally celebrate spring on May Day in many places; in others, it’s an occasion for honoring workers. All in all, it seems like an auspicious time to embark on a new endeavor.
The long May Day drive from Anchorage to McCarthy provided a good chance to contemplate 49 Writers’ past and future and my own changing role. Green up was on in force early and a lot of animals were out, including a beaver crossing the road, a porcupine crossing the road, and a moose crossing
the road. (Nope, no chickens.) 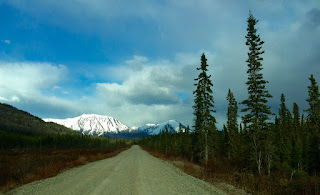 Driving from watershed to watershed, I thought of the Alaska Literary Map, a nice ArcGIS map that Britta Schroeder organized by watershed. I considered my own literary map of home, and the scads of ways 49 Writers has shaped that for the better over the years. I might be a sucker for
gorgeous scenery and the season, but I felt gratitude.

Our literary family in Alaska is growing, overall, despite some aching loss, lately, and widespread distress in the university system. Our collective successes are something to celebrate, though, whether we’re writing to publish or writing to simply think, remember, and feel. The existence, growth, and adaptation of 49 Writers itself, over the years, represents a creative, collaborative community expression.

Rolling toward the end of the McCarthy Road and beyond, last night, I thought about the exciting new Storyknife Writers Retreat down at the end of another road—the one that leads to Homer. I’m pleased to know that our outgoing director, Erin Coughlin Hollowell, will manage it with all the care and experience she brought to 49 Writers during her tenure while being afforded more time to write, too. I also thought about 49 Writers’ chance to facilitate six writers workshops early in June in the Mat-Su Valley in partnership with the Machetanz Arts Festival, another case-in-point indicator of Alaska’s literary
momentum.

Every time I drive between Anchorage and McCarthy I also think about 49 Writers’ beginnings. When I pass the turnoff in the Glacier View area I always think back to the time I wended down to the river there with Deb and Andromeda. We holed up in a house not far downstream from the Matanuska
Glacier and hammered out the original strategic plan and vision for 49 Writers.

Every moving part of the organization has changed since then, and will continue to do so. Spring is full of reminders of how dynamism and change characterize our landscapes, and this season I’m feeling how true that is for 49 Writers, as well.

It felt so good to get out to the cabin again last night, and to hear songbirds sing the sun down. A pair of great horned owls called in the dark, later, while the stars brightened. By morning, weather had moved in, and rain that was almost snow fell steadily. I “took my waking slow” and mumbled my way through Roethke’s poem while I made coffee, fed the fire, and smiled about going onward into the wild 49 Writers yonder in new ways. See you all there!
~ Jeremy