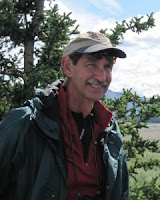 These days when I put on my State Writer hat, it mostly means I’m about to hit the road for some other Alaskan town, and more often than not it means I’m driving. Maybe I’d like to tell you about my travels, but what, I wonder, do we readers and writers want to know from all this traveling? Writing about our travels is not as old as our human desire to travel, but it’s at least as old as written language itself. The Odyssey might be thought of as a strange travel narrative around the Mediterranean Sea, true to geography to the point that people have tried to pin down the various stops in Odysseus’ journey. Here’s reportage of the strange and foreign. Haven’t writers from John Muir to John McPhee come into this country to report back to those too timid to face the mosquitoes and the minus 40 temperatures?
For a while that sort of travel writing may have been enough: the writer shows us places he’s been, the strange and exotic, the places we’re likely never to go. But, well, we manage to get ourselves to all sorts of places these days. I probably know a dozen folks who’ve spent time in Antarctica, for example. And with the gifts first of still pictures and then motion pictures, the most exotic locales have been made easily familiar in ways that writers may find hard to beat. There aren’t many corners of the world people have yet to be introduced to by photo spreads in magazines and TV documentaries.
What’s a writer to do? What fresh purpose might we have when we set out on the road? Bashō in his Narrow Road to the Interior offers the example of writer as spiritual pilgrim, and the form he chooses, the haibun, suits him well. Mostly written as a prose narrative, the Narrow Road to the Interior burst into haiku at moments of greatest intensity. It’s a good model for all us who do travel, for most travel is finally routine, placing one foot in front of another, or turning one more revolution of our bicycle’s cranks, or making another stroke with a paddle. Then, suddenly, a black bear steps into the trail ahead of us or a small herd of caribou swim the river. Such moments should elicit more than a mere “wow” from the attuned writer. There’s the surprise, the sudden turn from the ordinary to the moment worth savoring. This is what we came to see and to write about.
I used the haibun form to record a cycling trip my brother and I took on the Blue Ridge Parkway and Skyline Drive through North Carolina and Virginia. My awareness of the expectations of the form sharpened my attention throughout the trip. I was looking for the moments of intensity. And after a while, I began to shape those moments into rough haiku as I went, writing them down only at the end of each day.
Here’s one haiku written after a long rainy ride when the road grew suddenly filled with dozens of salamanders of various sizes:
Bright salamander
Glows orange on the roadway.
A Crackerjack Prize.
From behind the windshield of a speeding car, all effects are diminished: the fauna, the weather, the lay of the land itself. And even more, the effect travel may have on the writer herself. Driving is a soporific.
Finally, though, isn’t travel in this time when there are truly few new places a means for us to discover ourselves? And isn’t an element of travel courting risk? Even if it’s only the risk of encountering an unfamiliar place? I suppose I’m arguing for a riskier risk, for putting oneself out there in ways that are more physically demanding, whether that means facing dangers of the natural world, or putting strains on our stamina or skills. Isn’t that how we learn who we are?
Even our descriptions of what we see and the people we might encounter are chosen for the way those things have affected us. As Montaigne might have it, our travels are our lessons about ourselves, for ourselves.
There may be a romance of travel. At least initially. Every copy of Adventure Cyclist features photos of cyclists pedaling along on sunny days before expansive vistas. Where are the days of driving rains, ugly headwinds, those days when the romance is replaced by the reality? I’d say that’s what we came for.
Which gets me to that other On the Road, the book celebrating the romance of the road—cut loose, take off, drive fast and recklessly in other people’s cars, do other crazy stuff with a crazy companion. Oh my. On the Road is not a particularly well-written book, and the insights (if any) are pretty slight. Why does it stick around?
It’s the representation of an idea as much as a novel, to get out on the road, no matter how naïve or ill prepared. With luck, though, a traveler may learn something of himself. Or he may end up starving to death in an abandoned bus on the Stampede Road and leaving no evidence of insight into himself behind.
So, writers, when you hit the road or the backcountry, remember your bear mace, bug dope and water filter. Take your map, all your senses, and your pencil and notebook.

~
Frank Soos taught English and creative writing at UAF from 1986-2004 and is serving as the 2014-2016 Alaska State Writer Laureate. His most recent title is Unpleasantries: Considerations of Difficult Questions (University of Washington Press, 2016). Other publications include Double Moon: Constructions and Conversations with Margo Klass (Boreal Books, 2009) and Under Northern Lights: Writers and Artists on the Alaskan Landscape, co-edited with Kes Woodward (University of Washington Press, 2000), among others.

This post was originally published online by the Fairbanks Arts Association (FAA) and appears here with permission from FAA and the author.
Views: 23