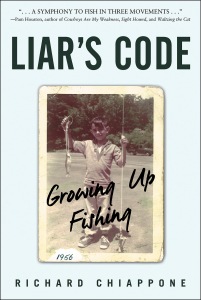 Being Fishermen, my friends and I were all great liars. We fibbed about the monster perch we caught at the end of our street when
none of the other kids were around. We jacked up the number of
bullheads or sunnies hauled in on family vacations, far from the
neighborhood. Fish that got away ballooned with each telling, like the river’s
algae blooms in August. All honest “stretchers,” as Huck would have
it. And we never called each other on them. We never would.

Deceit is in my blood. My
grandfather once told me about being a young man in Sicily, playing
cards with his friends. “Everybody knew everybody at the table was
cheating,” he said. Then he paused, as grandfathers will when
dispensing wisdom. “But nobody said anything!” He smiled at the memory
and added, nostalgically, “Of course everybody had a knife.”
(Liar’s Code, Richard Chiappone 2016)

The
eighteen personal essays collected in Liar’s
Code were written over a period of about fifteen years and published in journals,
both Alaskan and national. In compiling them for this collection, it became
clear that they comprise a memoir in linked stories—stories from my life.
Although I have also been a father, a construction worker (for nearly forty
years), a working musician, a writer, and a college professor, this is an
account of my life as a fisherman in three vastly different parts of the world.

The first
section portrays the world of my childhood along the Niagara River in upstate
NY, learning to fish in conditions less than idyllic, while dreaming of moving
to the mythical Great North Woods. The second group of essays involves reaching
that goal when I moved to Alaska in my early thirties—a huge change of scene
from the industrial environs where I spent the first half of my life. The last
section reflects my late-in-life ongoing infatuation with tropical saltwater
fly fishing, another wildly disparate environment, and about as far as you can
get from both Alaska and the Rust Belt.
(From the introduction to Liar’s Code)

“You don’t
need to know a chub from a chinook to love these stories.”
Nancy
Lord, former Alaska Writer Laureate

“Each
essay swims from the page with the reader in tow.”
John Larison, author of Whiskey When We’re Dry

“These
stories with their sidelong glances and arched eyebrows would not be nearly so
much fun if he caught more fish.”
Tom
Kizzia, author of Pilgrim’s Wilderness.

“Rich
Chiappone makes you wish to have had a life so full.”
Pete Fromm, author of If Not For This

Richard Chiappone is the author of
the collections Water
of an Undetermined Depth, Opening
Days, and Liar’s Code. His stories have appeared in magazines
including Alaska Magazine, Playboy, the Sun, and Gray’s Sporting Journal,
along with literary magazines including the Crescent Review, The Missouri Review, South Dakota Review, ZYZZYVA, and others. His work has been featured on BBC Radio, and made into a
short film featured at international film festivals. An Alaskan since 1982, he
is proud to be a member of 49 Writers (and a guest blog post writer), and lives
in Homer with his wife and cats. He teaches fiction and nonfiction writing for
the University of Alaska Anchorage, and for the Kachemak Bay Campus of the
Kenai Peninsula College. Liar’s Code
is published by Skyhorse Publishing, Inc. of New York City. It is available in
both hardbound and electronic editions.

For more information on Liar’s
Code, please go to http://www.skyhorsepublishing.com/