I drank,
forcing the Kool-Aid in between my tongue and the swelling log of sandwich. The
Kool-Aid was like glue that attached the massive wad of sandwich. More if it
ran out both sides of my mouth as I gasp for air. Wiping my chin on my sleeve,
I was thankful for the extra seconds to think. What should I say to Mrs.
Taylor? No one had asked me that before. In fact, I had never met anyone before
who didn’t already know my parents and my whole life story. Mrs. Taylor handed
Taylor another sandwich and took my silence as an invitation to ask another
question. “Is your father stationed here at the Air Force base?”

My face turned red. I could feel it.
And my eyes watered. I shook my head, and, suddenly, the mass on my palette
dislodged. I gulped it down and blurted out, “He’s dead.” (Dan Walker, Secondhand
Summer) 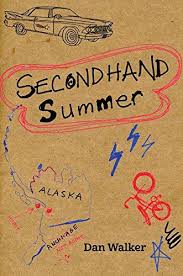 Secondhand Summer begins
in Ninilchik, a tiny Alaskan community where the Barger family fishes for
salmon. The father’s death forces a move from their homestead to an apartment
in a poor section of Anchorage. The tale is about Sam, a twelve-year-old boy
who loved the homestead fishing life he left behind. Like most kids his age,
his physical abilities and his imagination exceed his judgment and knowledge. The
story focuses on the boy’s adventuresome adjustments to the big city, the loss
of his father, and becoming a teenager. An abandoned nightclub, which Sam and
his friends take over as their “fort”, absorbs Sam’s attention, energy,
and gives him chance to escape from an adult controlled world, but his time
runs out when the teenagers take over and then the city steps in. By the end of
the summer, Sam looses his club, one of his new friends, and his idealism,
leaving him feeling quite alone as he enters seventh grade, wilder and wiser.


“Secondhand Summer is based on my own experience when I had to move to
Anchorage from our homestead near Ninilchik after my father died. It was a
summer of great change and adventure for a boy from the woods to move to the
big city. Many of the experiences are very real, but it is a novel. I worked for
years as a teacher, and in the process of developing this book with my editor,
I realized how important it is to write books that boys want to read, our most
reluctant readers. I also want the book to be sophisticated enough that it
would engage adults. I think it tells a good story of life in 1965 on
Government Hill in Anchorage.” — the author
Dan Walker is an Alaskan
homesteaders’ son who grew up to become a teacher and a writer. He has worked
as a chef, innkeeper, merchant seaman, fisherman, and carpenter. Drawing from
these varied – and storied – experiences, he has blogged at http://mybearlake.blogspot.com/
and written essays, professional articles, and fiction in magazines and literary
journals. Dan has over thirty years in education and was named Teacher of the
Year for Alaska in 1999. Today, Dan works with schools in rural Alaska and
shares life on a lake near Seward with his college sweetheart and muse,
Madelyn.
Dan has been a member of 49 Writers
for two years. His writing workshops and consulting work take him throughout
Alaska from Sitka to Barrow to Perryville, where he is devoted to working with
teachers and students and rewarded by experiencing the remote Alaska that few
people get to know. Secondhand Summer
was released in paperback by Alaska Northwest Books on June 7, 2016.
Views: 8