Julia O’Malley‘s food writing workshop, held at board member Kirsten Dixon‘s incredible Tutka Bay Lodge, was written up in the New York Times Food newsletter… and Tom Kizzia‘s book Pilgrim’s Wilderness even gets a shout out.


Speaking of Tutka Bay Lodge, we have one last spot available for our Tutka Bay Writers Retreat with Debra Magpie Earling. Claim it!


A wee bird said Daniel Henry‘s book, Across the Shaman’s River: John Muir, the Tlingit Stronghold, and the Opening of the North will be published by University of Alaska Press in Fall 2017. 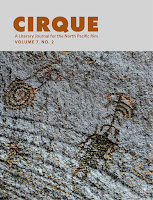 Cirque: A Literary Journal for the North Pacific Rim issue 14 (or Volume 7, No. 2) is now available. For seven years, Cirque has published the work of Alaskan and Pacific Northwest writers. It’s viewable for free online, with hard copies available for purchase. The editors accept work from Alaska, Yukon Territory, British Columbia, Washington, Oregon, Idaho, Montana, Hawaii, and Chukotka. The new issue was already launched in Anchorage; upcoming out-of-state events are listed below.

Eowyn Ivy: To the Bright Edge of the World book launch party
PALMER | Tuesday, August 2nd, 6:30 pm at the Palmer Depot (610 S Valley Way). Open to the public. Reserve a copy through Fireside Books at www.goodbooksbadcoffee.com or by calling (907) 745-2665.

ANCHORAGE | 1) Monday, Aug. 15, 1-3 pm at the Anchorage Museum and 2) Aug. 18, 6-8 pm at Barnes & Noble. Author Ashley Sweeney will sign copies of her new novel, Eliza Waite. The book is part diary, part recipe file, and part Gold Rush. Sweeney did extensive research for this book at the Anchorage Museum. A native New Yorker, Ashley E. Sweeney lives and writes in La Conner, Washington. She is a graduate of Wheaton College in Norton, MA and is an award-winning journalist in Washington State. Included with Museum admission.
INTERIOR
The Fairbanks Summer Arts Festival
FAIRBANKS | July 17-31, 2016. See below or here for info on the creative writing programing. The Festival offers more than 200 workshops and 100 performances in music, dance, visual arts, literary arts, theatre, culinary arts, and healing arts for people who are enthusiastic about the fine arts.
FAIRBANKS | Fairbanks Arts Association hosts the oldest literary reading series in the state. Every month, writers reading their own work publicly at a community meet-up where people can connect with other lovers of literature. Readings are held on the day after First Friday, usually the first Saturday of the month at 7 pm. Most reading are held in the Bear Gallery in Pioneer Park, although occasionally in the summer (June, July, and August) the weather is beautiful reading are held outside to another spot in Pioneer Park. Upcoming:
August 6: Paul Greci
September: UAF Faculty Reading
October: TBA
November: TBA
December: Rosemary McGuire
Additional readings and events may be held, but the First Saturday Literary Reading Series is monthly at 7 pm the day after First Friday (except February).

SOUTHEAST
Woosh Kinaadeiyi’s Summer Showcase Redux
JUNEAU | Tuesday, July 29th at 7pm, at KTOO / 360 Egan Drive, Alaska. KTOO Alaska Originals series presents Woosh Kinaadeiyí has has been given the opportunity to take part in KTOO’s “Alaska Originals” series. “Alaska Originals” is KTOO’s statewide TV (360 North Television) and radio program that features Alaskan musicians and artists sharing original work. The performance will be recorded for broadcast throughout Alaska. All are invited to be a part of the studio audience. Woosh Kinaadeiyí will offer spoken word performances from ZIggy Unzicker, Ryan Carrillo, Mike Christenson, and Christy NaMee Eriksen! All poetry will be accompanied by Jacob Pickard, with host Conor Lendrum. Doors will open at 6:30 and the show will start at 7 sharp. Admission will be pay as you can, and seating is limited. Learn more about 360 North, KTOO or the “Alaska Originals” series, here.


OUT OF STATE
BOTHELL, WASHINGTON | A Cirque reading will be held on August 19, 5:30 pm, at Tsuga Gallery on Main Street. more info


BELLINGHAM, WASHINGTON | A Cirque reading will be held at the Mount Baker Theater, Encore Room, August 28, 2016 at 3 pm. more info

CONFERENCES, RETREATS, and RESIDENCIES
Fairbanks Summer Arts Festival Creative Writing Class
July 18-29th, 2016,  M-F 9:00-4:20
FAIRBANKS | This class is open to people with all levels of writing skills. The focus is on generating new work. Students will write every day under the guidance of the Festival staff. Each day will offer directed writing activities and close readings of literature from a writer’s perspective. We will discuss poetry and prose, and students may write either or both. The class will focus on generating new writing. Students will practice several stages of the writing process: beginning, drafting and revising. 1 week  $210, two weeks $395 | University credit is available, with separate registration.
2016 Tutka Bay Writers Retreat
September 9-11th, 2016 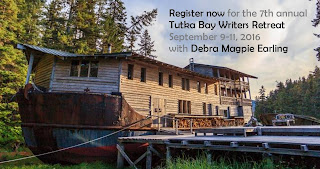 ANCHORAGE | This year’s conference is a partnership between Alaska Writers Guild, 49 Writers, and the Society of Children’s Book Writers and Illustrators. This all-day event takes place at the BP Energy + Conference Center and includes keynotes and panels, as well as writing craft, marketing, traditional publishing, self publishing, children’s literature, illustration tracks. Sign up for optional Intensives or Roundtable Critiques, or take advantage of One-on-One Manuscript Excerpt Reviews. Early bird discount extended until July 31st at only $95 for AWG/49 Writers/SCBWI members or $145 for non-members. More info and registration here.


The North Words Writers Symposium has announced their 2017 dates: May 31-June 3rd, which should better accommodate educators. More details to come.
OPPORTUNITIES and AWARDS for WRITERS
Rasmuson Foundation Artist Residency Program application period is open until August 15, 2016. Eligible creative writers or media artists are invited to apply for fully-funded, two-month-long writing residencies in 2017 at Djerassi Resident Artists Program in the Santa Cruz Mountains near San Francisco. Alaska writers who have received the award in prior years include Arlitia Jones, Christine Byl, Ernestine Saankalaxt’ Hayes, and Rosemary McGuire. Artists of other disciplines are eligible to apply for residencies elsewhere, too. Learn more and apply.

The Alaska Literary Awards are open to poets, playwrights, screenwriters, writers of fiction and literary nonfiction, writers of multi-genre, cross-genre, or genre-defying work. Any Alaska writer over 18 who is not a full-time student is eligible to apply. Quality of the work is the primary consideration in determining who receives the awards. $5,000 awards will be given, all from privately donated funds. Apply at www.callforentry.org by Sept. 1, 2016 at 9:59 AKDT.


Ghostwriting opportunity | A search is underway to find an experienced ghostwriter to write a series of twelve non-fiction articles for publication. These articles will be about the history of an immigrant family arriving in Alaska in the late ’40s. The selected ghostwriter will be expected to agree on the proposed content and timeline for a series of articles and then interview the client and develop the articles from the interviews. Interested writers are invited to provide a CV, recent examples of work as a ghostwriter, demonstration of the ability to write in the client’s voice, examples/references which show an ability to meet deadlines and communicate effectively and efficiently, references which show an ability to work well with a client to enable a sharing of ideas, fact checking and research skills, pay rate, ability to discuss ideas and research with the client in a non-judgmental way; description of process to give the client the opportunity to approve, ask questions and give feedback on the material, and agreement to sign a nondisclosure agreement. If interested, please send required documents and your rates to 13gwriter13@gmail.com by Friday, August 19, 2016.
Thank You for Your Support!
49 Writers members and donors make this blog possible, along with our workshops, Crosscurrents events, readings and craft talks, and other programs. Not a member yet? Join Us
Have news or events you’d like to see listed here? Email details to 49roundup (at) gmail.com. Your message must be received by noon on the Thursday before the roundup is scheduled to run. Unless your event falls in the “Opportunities and Awards” category, it should occur no more than 30 days from when we receive your email.
Views: 13