A 48-year-old woman facing
middle-age malaise and the upheaval of divorce becomes a motorcycle enthusiast,
turning her own quest into a larger meditation on why we need risk in order to
live fuller lives. 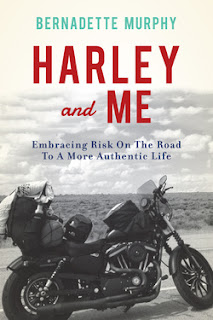 That’s the premise of Bernadette Murphy’s new memoir, Harley and Me, published in May. Murphy teaches creative nonfiction in the Antioch University Los
Angeles MFA program, where I had the pleasure of studying with her about five
years ago.
But it wasn’t because
I personally knew Murphy that I wanted to interview her for this blog. As soon
as I started reading I felt like Murphy was a candidate for honorary Alaska
status. In L.A., people might have raised eyebrows at this mother’s decision
to learn how to handle a heavy bike and head off on a cross-country journey,
but all the Alaskans I know would understand in a heartbeat.
Motorcycle-mama
content aside, Murphy’s memoir touches on two areas that come up in many conversations
I have with fellow AK writers of creative nonfiction: How do you weave personal
narrative with science or reportage? And how do you face criticism from your own family and friends when you decide to write about the
personal?
Thanks to Bernadette Murphy
for joining us. 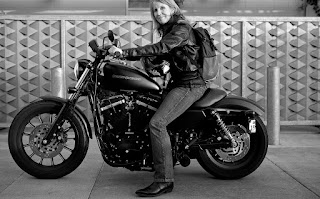 When and how did you realize that your own motorcycling
project could become a gateway for talking about this larger issue of women’s
healthy risk-taking? Do you remember an aha moment when you knew this wasn’t
just something you wanted to experience but also write about, and that it could
mean something timely to a larger audience?
I approached learning
to ride a motorcycle with the idea of writing about the experience foremost in
mind. I was working on a novel and decided that my main character, a young
graduate student from Ireland living in Los Angeles, would use a motorcycle to
get around the city.  I thought I’d take
a weekend class, have a little fun, and be able to write the character’s
experience.  But once I got in the class,
a dormant little spark in me flared.  Out
of the blue, it seemed, I was hungering for the full motorcycle
experience.  I felt so empowered, just
sitting on the bike – and I wanted more of that feeling.
So then I thought, OK,
I’ll write a memoir. But as I started exploring my experience in prose, I
realized my biggest question wasn’t “What’s it like to ride a motorcycle and
what is that subculture like?” which would lend itself to a straight-out
memoir, but “How could I possibly have lived 48 years of my life with no
inkling that I needed risk to make me feel happy?”  So I decided to look into the neuroscience,
biology, and psychology of risk taking to help explain to myself what I was
doing.
On some level, I was
worried that I was having a midlife crisis and felt horribly clichéd.  On another level, I worried that the mental
illness that had destroyed my mother’s life might be taking root in me – I
wasn’t a motorcycle-riding kind of person.
What was I doing!  I needed to do
the research to reassure myself that my sudden bent for risk taking was
actually healthy, normal, and good for me.
And that’s when it clicked: I probably wasn’t the only person going
through something like this.  And maybe
we all need to know that risk is good for us.

Andromeda Romano-Lax is the author of Behave, a novel about science and motherhood set in the Roaring Twenties, chosen as one of Amazon’s “Best Books of the Year So Far” 2016 list. She is a co-founder of 49 Writers and teaches in the UAA MFA Creative Writing Program. She is also writing a book about midlife adventures, including her current year-long quest to run trails in all 50 states.
Views: 10

1 thought on “Andromeda: 4.9 Questions for Bernadette Murphy, author of Harley and Me: Embracing Risk On the Road to a More Authentic Life”