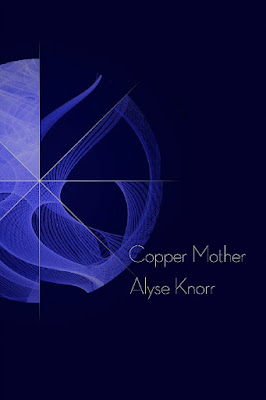 After Our Friends
arrived,
we took them to Burger King for the
cinnamon-bun breakfast
and along the way, showed them our
skyscrapers and cars,
several war zones and exploding
beached whales, plus all that
pollution and the Beijing women
bending through morning exercises—
the usual signs of a modern society
reflecting upon itself,
lamenting all its wrongs as it
commits them, at the first right
after the second turn of the
century. But we bought them coffee,
even remembered to ask if they took
cream, and we were quite
charming, and for some reason
longed for a jukebox to play
in our booth, so we could show them
more rock ‘n’ roll—
just the classic stuff—and when we
explained jukeboxes to them,
it made us nostalgic for nostalgia
and Johnny Cash, and Our Friends
had to mop up our tears with paper
napkins, nodding along
again that yes, the dancing must
have been wonderful.
(from
Copper Mother by Alyse Knorr. “After Our Friends arrived” first appeared in Elective Affinities).
Copper Mother is a novel in verse taking as its
inspiration the Golden Record, a time capsule of human civilization launched
into space aboard NASA’s Voyager probe in 1977. The Golden Record, which
contained images, sounds, world language greetings, and music from Earth, was
intended to represent our species to any intelligent life forms who may one day
come across it. The Voyager probes are two of the only human-created objects to
ever leave our solar system.
Copper Mother imagines what might happen if an
alien civilization were to find the Golden Record and visit Earth. In addition
to poems exploring the contents of the Golden Record, the book includes stories
of the aliens (“Our Friends”) navigating public libraries and public restrooms,
visiting the Golden Gate Bridge and the Grand Canyon, watching the Academy
Awards and playing Clue.
“If the
Voyager Golden Record was intended to display the diversity of culture and life
on Earth, Alyse Knorr’s wildly inventive Copper Mother is a retake, our
new rendition. Honest in critique of gender, violence, and environmental decay,
these poems allow that we see ourselves from afar.” –Sally Keith, author of River
House
“Knorr’s
poems contain such a heart to them, one that is aware of the complicated ethics
of its own endeavor, and one that does it quite artfully and seamlessly too.” –JD
Scott, Real Pants
“Knorr’s
collection reads as a cautionary tale of ethical engagement with the other, and
how such interactions can easily transform into solipsistic
explorations.” –Joshua Ware, author of Unwanted Invention and
Vargtimmen
Alyse Knorr is the author of Super Mario Bros. 3 (Boss Fight Books 2016), Copper Mother (Switchback Books 2016), and Annotated Glass (Furniture Press Books 2013). She also authored the
chapbooks Epithalamia (Horse Less Press 2015) and Alternates (dancing girl press 2014). Her work has appeared in Denver Quarterly, Columbia Poetry Review,
The Greensboro Review, Hayden’s Ferry Review, storySouth, ZYZZYVA, Caketrain, and The Southern Poetry Anthology: Georgia, among others. She received her MFA from George Mason University.
Alyse is a co-founding editor of Gazing Grain Press and teaches English at
Regis University. She is a former resident of Anchorage, where she taught
for 49 Writers and at the University of Alaska Anchorage.
Copper
Mother is published by Switchback Books
and is available as a paperback. For more information and to purchase, visit http://switchbackbooks.com/coppermother.html.
Views: 63