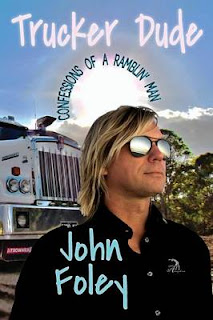 “We were hiking down this trail outside of Anchorage,
and we see a moose blocking the trail… Big animal, so we stopped and were
thinking about cutting through the woods to get around… Then this guy walked
right by and sort of sneered, as if to say, ‘Real men don’t fear moose.’ I was
tempted to show him the damage an over-the-hill lineman can still inflict on
the average human being… So I turn to Marie and say, ‘You know, honey, I’ll bet
than animal weighs a thousand pounds. If you saw a thousand-pound guy eating at
Starbucks, would you get in his face?’ ‘The answer is no,’ Marie yelled from
the kitchen. ‘Not even if he stole my breve latte!'” (from Trucker Dude by John Foley)
TD is an artist and former football player who has a sore
ass from long-haul trucking. He’s thinking about taking a year off just to
paint and hang out with his girlfriend, Linda Sue, when his trucker friend
Flynn proposes an armored car heist. TD—short for Tommy Dennison as well as
Trucker Dude—agrees to go along with the elaborate plan, despite serious
misgivings.
He quits his trucking job, but not before a final run from
Seattle to Miami. On the road he meets Jason, a hitchhiking singer-songwriter
with hippie and religious tendencies. Jason was studying for the priesthood,
but his sideline as a chick magnet derailed that career course. As they
gradually become friends, TD confides his qualms about the heist. He also has qualms
about marriage, but Linda Sue is getting tired of her girlfriend status, giving
TD a lot to think about out there on the highway of life.
“Foley writes with a flow and clarity that carry the
reader along, effortless and entertaining.”—Shana Loshbaugh, Fairbanks
Daily News-Miner
John Foley is a writer, teacher, and artist living in
Prescott Valley, Arizona. John has written several young adult novels,
including Hoops of Steel, which was named a Book for the Teen-Age in 2008. In
addition, he has been an artist-in-residence at several national parks, and his
paintings have been juried into many shows. You can see his work at
HikerDudeArt.com. John lived in Alaska for most of the 1990s, working as a
reporter for The Anchorage Times and teaching in Anchorage, Tetlin and Gambell.
He has returned for extended visits to the Brooks Range and elsewhere in the
state. Trucker Dude is available in both hardcover and paperback at Amazon.com,
Barnes&Noble.com and Anaphoraliterary.com.
Views: 19