Membership
Menu
Last month, 15 people descended upon a remote harbor near Glacier Bay for a week of boot camp to train minds and mouths in the art of environmental rhetoric. Despite the usual uncertainty, shyness, and/or trauma around speech, students signed up for a course because they saw no other way to change public attitudes and laws than to speak out.
Most would rather not. Students agreed that public speaking is a skill owned by few of those involved in modern social movements. We have become more comfortable shooting opinions with digital cannons rather than with our voices in the company of actual humans. Yet, as we determined over days of mist, cottony fog, and sun-blasted beaches, speech is an essential tool of democracy.
More than a year earlier, life-long Alaskan Zach Brown laid out his vision to me on a beach-walk in Gustavus. As director of the newly-formed Inian Island Institute, Zach sought a variety of approaches to educate Alaskans and others about environmental concerns, especially toward developing skills necessary to induce actual change. We shared a concern that the global movement on climate change needed more brave advocates willing to present their views publicly, more who could transpose scientific and technical language into messages that made a difference to politicians, corporations, and the masses of consumers in love with their air conditioning.
Then Zach talked about the facility—a compound of three houses, outbuildings, ample yard, and gardens tucked inside a protected cove on South Inian Island. Once a fish camp for Hoonah Tlingits and later a fox farm, the place was bought in 1973 by the Howe brothers. They called it the Hobbit Hole. It was known around Southeast Alaska as a communal haven for salmon trollers and voyagers. The Institute is now in the process of purchasing the spread.
Enchanted by the opportunity, I proposed a UAS ED593 summer course, Environmental Rhetoric. Zach grinned. “I hoped you’d say that.”
Twelve successful application essays were chosen from many: strong, passionate descriptions of heroic efforts to make a difference and of desires for greater efficacy. As students and staff watched the water taxi glide away, our thoughts shifted toward the immersion ahead.
Lectures for each morning focused on themes that interlaced as the week unfolded: Tlingit migration and culture, Aristotle, principles of rhetoric, communication behaviors (including nonverbal), audience analysis, logic, fallacies, argumentation, and histories of Alaskan and American land use conflict and resolution. Each morning session was capped by an announcement of the evening’s speech assignment.
Afternoons, Zach led the group on hikes or kayak outings into the wild waters that surge between islands separating Icy Strait from the oceanic surges of Cross Sound. With each sojourn, Zach’s patient explications clarified the natural history of the island and environs. Roiling puff-clouds parted when we reached the 1300-foot summit of the island, revealing monster views of Dundas and Taylor Bays to the north and ocean in the west.
Often delivered around the campfire, evening speeches were culminations of each day’s work. The energy and expectation crackled like flames in the fire circle. Students delivered short personal stories on the first night, followed by formal two-minute testimony, oratory meant for a mixed audience, and debates.
The cumulative experience shook us to the core. With due acknowledgement to the magic of the Hobbit Hole (and the fine victuals from Jane and Greg Howe!), at the end of the week our hearty Corps of Rhetoricians was bursting to re-engage with the world. All were armed with tools honed by Aristotle, Jefferson, and Tlingit elders, supported by a firm belief in the possibility of renewal and healing. 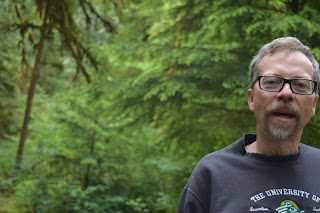 Long-time Haines resident Daniel Lee Henry is an instructor of communication for UAS and Lane Community College in Eugene, Oregon. His book, Across the Shaman’s River: John Muir, the Tlingit Stronghold, and the Opening of the North,
is to be published by University of Alaska Press in October 2017.
Views: 70