In many popular books on the craft of writing, a common pattern emerges: the reader, writer, and protagonists are purposely defaulted to male.

John Vorhaus in The Comic Toolbox writes, “A lot of times I call these people he, though of course I mean both he and she. Language lags behind social change, and the English language still lacks an easy convention for gender-neutral third-person pronouns.”

John Gardener, in The Art of Fiction, says, “Again and again this book speaks of the writer as ‘he,’ though many of the best writers I have read or have taught in writing classes are female”.

And Robert McKee says at the beginning of his tome, Story, “To deal with the pronoun problem I have avoided constructions that distract the reader’s eye, such as the annoying alternation of ‘she’ and ‘her’ with ‘he’ and ‘him,’ the repetitious ‘he and she’ and ‘him and her,’ the awkward ‘s/he’ and ‘her/im,’ and the ungrammatical ‘they’ and ‘them’ as neuter singulars. Rather, I use the nonexclusive ‘he’ and ‘him’ to mean ‘writer’”.

This amounts to a kind of curious lampshading. These authors essentially tell the reader: I’m not going to include female pronouns, but don’t worry, this text isn’t sexist because I’m telling you it’s not.

This might be appropriate if it were, as McKee asserts, simply a matter of awkward phrasing. The problem, of course, is that McKee’s ‘nonexclusive he,’ doesn’t exist. As NPR’s Geoff Nunberg points out, “Most writers now realize that the so-called gender-neutral ‘he’ is anything but. Nobody would ever say, ‘Every candidate thanked his spouse, including Hillary.’ When you utter ‘he,’ you always bring a male to mind.”

Cordelia Fine, in her book Delusions of Gender, sums up associative learning: “The principle behind learning in associative memory is simple: as its name suggests, what is picked up are associations in the environment”.

That is to say, associative learning happens at the unconscious level. While a person might consciously endorse the belief that women would make excellent astronauts, place a high enough percentage of men in astronaut suits and the subconscious mind draws its own conclusions.

“Measures of implicit associations reveal that men, more than women, are implicitly associated with science, maths, career, hierarchy and high authority. In contrast, women, more than men, are implicitly associated with family and domesticity, egalitarianism and low authority,” Fine writes. These patterns in media and advertising are not negligible; they magnify and reinforce the most common images and ideas found in society.

Another complicating factor is that women who author craft books often don’t take the inverse approach and refer to the writer, reader, and protagonist as women. In fact, I don’t know of a single craft book that uses exclusively female pronouns. More often, men default to male pronouns and women pepper their writing with a more egalitarian mix of both female and male pronouns. Which results in male pronouns far, far outnumbering female pronouns, further cementing a sort of diffuse, accepted, default arrangement of “men” as “just about everyone”.

Gender bias is a complex topic with a myriad of rotating and emerging factors. Implicit associations are just one small piece of the puzzle, but they matter. As Fine reminds the reader, “Place a woman behind almost every vacuum cleaner being pushed around a carpet and, by Jove, associative memory will pick up the pattern”.

Similarly, make every hero a male, every reader and writer a “he,” and it will take that much more mental work to envision a world Vorhaus and company already take for granted in which heroes are just as likely to be female and “women are many of the best writers.” 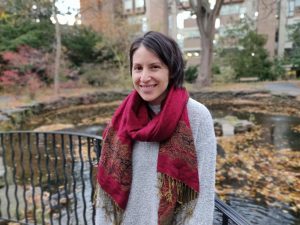 Kristen Ritter is the 49 Writers Communications Coordinator. She is a playwright, writer, and comedy performer living and working in Anchorage, Alaska. Her writing has been supported by The Alaska State Council on the Arts, The Kennedy Center, The U.S. Department of State, and Theater Alaska. In the spring 2022, in partnership with 49 Writers, she will be teaching the class, Girl Walks Into a Trope.

2 thoughts on “The Universal He by Kristen Ritter”