Warflower: A True Story of Family, Service and Life in Alaska by Robert Stark

“On my mother’s side of the family, every male served in the military. On my father’s side of the family, every male served prison time. My brother went to prison and I joined the army, we pride ourselves on family traditions. Mother used to comment on how handsome a man is in uniform, and I believed her. Her first husband was a golden gloves boxer in prison, her second husband was a Major in the National Guard, and her third and final husband was a murderer doing life without parole. Mother loved a man in uniform. She did her best for her two sons, and now she and my father are both dead, which is why I can finally tell this story.”

Bob Stark had no plans after high school. With his brother locked away in the only maximum-security prison in Alaska, his mom working overtime at the local grocery store, and his bad habits getting worse, he saw no hope for the future. Until the Army recruiter came to school offering an escape. Bob envisioned romantic adventures in Italy, life-saving missions in Africa, and friendships built on tough times — he wanted to be an honorable, dependable, and brave man — all of the things he was not. He signed the papers, and five days after graduation was sent out.

After basic training and airborne school, Bob is stationed in Italy where his eighteen-year-old dreams of travel and romance are cut short when his unit is ordered to parachute into Northern Iraq. He spends the next year in Iraq learning more than he could have ever imagined.

Four and a half years later, after two deployments and a long list of life lessons, Bob leaves Fort Campbell, Kentucky on a road trip west with the hopes of falling in love with the country he fought for. Along the way, he reunites with family and friends — from his happy-go-lucky mother in Arizona who talks to her incarcerated husband on the phone whenever she is not at work, to his foul-mouthed grandmother in Idaho who wears one glove and drinks beer with ice all day long, until finally reuniting with his high school sweetheart in Las Vegas — Bob begins a new chapter of self-discovery and acceptance that just may allow him to be the man he always wanted to be. Warflower is a coming-of-age story about family traditions, brotherhood, and one boy’s journey into manhood without a father to teach him.

“Unflinching and intimate, Warflower is as much a philosophical journey as a memoir, a journey that ends not at a destination but with wiser questions. Stark gives no quarter to the self-indulgence that typifies much of the work of this genre, laying bare the truths about himself and his experiences as he encountered them, undressed with poetry or excuses. Don’t be deceived, though: this is a work of art, not a recounting of facts, and as such, Stark’s language harnesses all the best of literary skill, at once sweeping the reader along and bringing her over and over again to a standstill. Warflower is stunning and sobering, ugly and enlightening, and will leave the reader more than eager for the next book from this author. Recommended for thinkers and explorers of all sorts.” -Cassondra Windwalker

“I loved this telling story of a young man’s unique journey through some harrowing experiences and incredible hardships. He easily makes you feel captivated at every turn of the page. I literally couldn’t put it down, and the one time I did, my daughter picked it up and read the entire thing in one sitting. This book is emotional, engaging, and thoroughly a delight from start to finish. Highly recommend!!” -Athena Ennenga 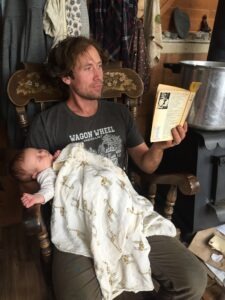