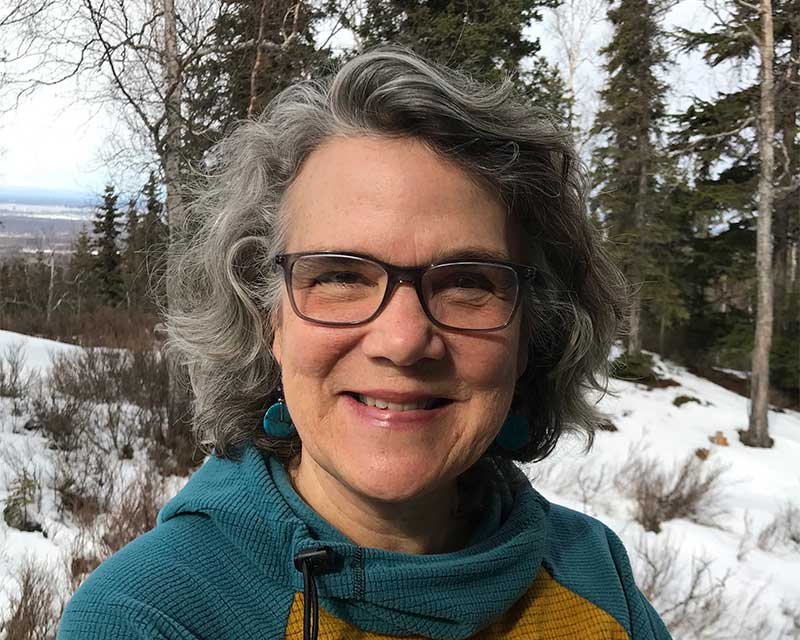 President | Anchorage
Barbara Hood moved to Fairbanks with her family at age ten, and has called Alaska home ever since. She received a BS in Biology from the University of Alaska Fairbanks, where she was drawn to writing as a staff reporter for the Polar Star student newspaper. Her interest continued in law school at the University of California Berkeley, where she served on the editorial board of Ecology Law Quarterly, one of the country’s oldest environmental law journals. During her legal career, Barbara worked in the public sector for Alaska Legal Services Corporation, the Alaska Attorney General’s Office, and the Alaska Court System. In addition, she helped her husband found and manage Great Harvest Bread Co. in Anchorage for over 23 years. Now fully retired, she volunteers for justice and writing organizations and pursues her longtime interests in creative writing, photography, and human rights advocacy. Her essays, poetry, fiction and commentary have appeared in the Anchorage Press, Anchorage Daily News, and CIRQUE. 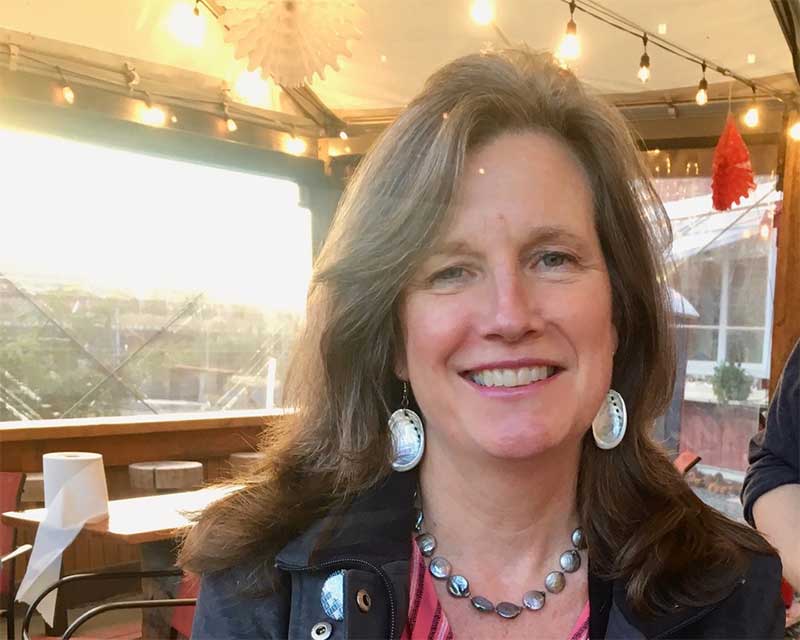 Vice President | Juneau
Katie Bausler is a former award-winning broadcast journalist, PR Director for the University of Alaska Southeast and current Community Relations Director for Bartlett Regional Hospital. She holds an MA in English from Middlebury College and an MFA in Creative Nonfiction from the University of Alaska Anchorage. She writes occasional columns for the Sunday We Alaskans section in the Alaska Dispatch newspaper and has had several pieces published in the University of Alaska Southeast literary journal, Tidal Echoes. Katie and her husband Karl are devoted residents of the island kingdom of Douglas, across the channel from Juneau, Alaska’s capital. 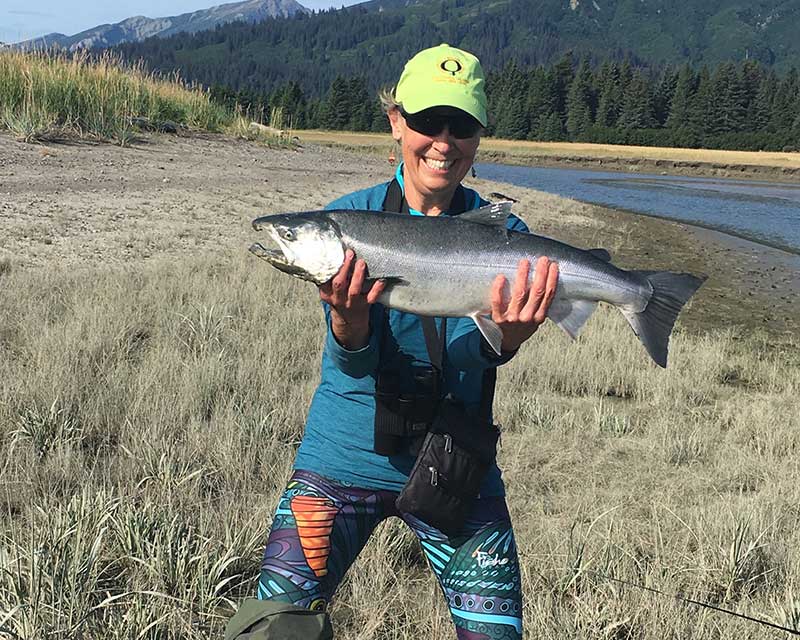 Secretary | Anchorage
Molly McCammon is the Founder, past Executive Director and now Senior Advisor of the Alaska Ocean Observing System, a non-profit established in 2003 to facilitate ocean observing activities and data products to meet the needs of marine stakeholders. Previously, she served as Executive Director of the Exxon Valdez Oil Spill Trustee Council for a decade. She holds a BA in Journalism from the University of California Berkeley and worked in journalism for many years. Her many volunteer commitments include ten years as a board member and past chair of the Great Land Trust. In 2020, she was awarded an Honorary Doctorate from the University of Alaska Anchorage in recognition of her many contributions to our state. Molly serves on the 49 Writers board because of her love of literature and the written word and her interest in “helping organizations think and plan strategically and facilitate networking opportunities to achieve goals.” 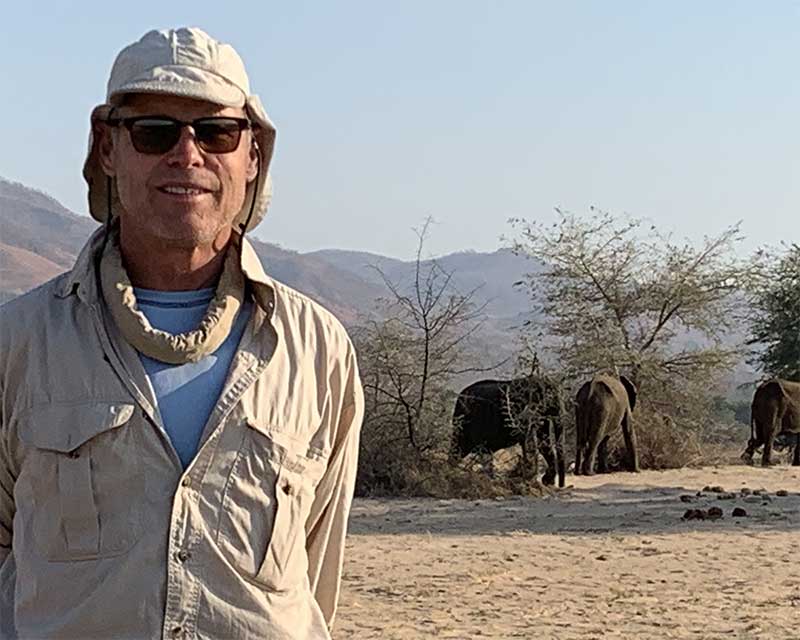 Treasurer | Fairbanks
Cam is a recovering attorney, edging ever closer to retirement, and seeking in creative writing a well-deserved respite from a long career trying to create small windows of clarity and humor in the otherwise opaque prose that is legal writing. He now embraces a family tradition of poetry; his grandfather, mother, and two sisters having broken trail for him. You will find him in Fairbanks, where he spends one third of each year camping on rivers and puttering in the garden, with the other two thirds devoted to removing snow, feeding the stove, and thinking hard thoughts about just how it is that he ended up here…. Of course, until you know the darkness, you don’t appreciate the light. As a new board member, he looks forward to getting to know creative writers around our great state, and trying to find ways to encourage our collective efforts to bring art to the arctic. 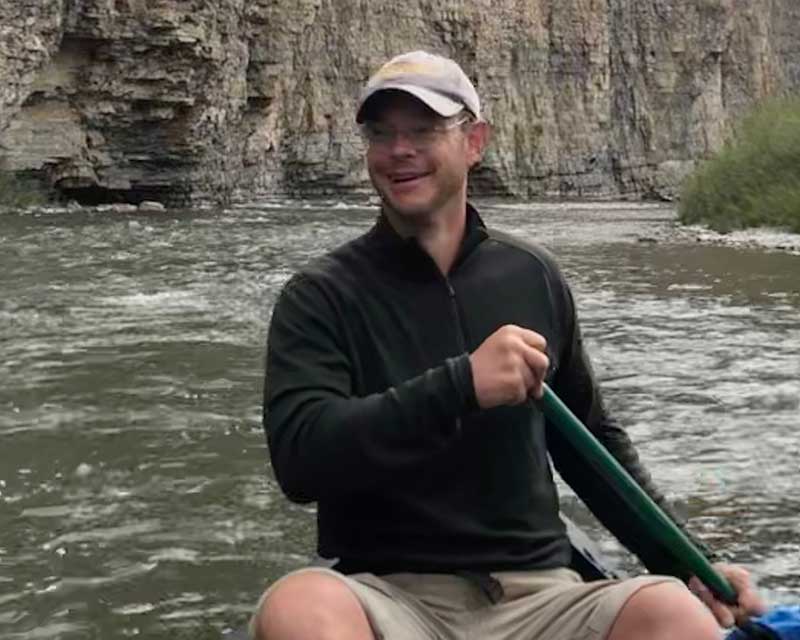 Board Member | Bethel
Ben Kuntz is an associate professor of English at UAF's Kuskokwim Campus in Bethel, where he has worked since 2003. He has a BA in creative writing and an MA in literature from the University of Montana and recently completed an MFA in fiction at Eastern Washington University. He and his wife, Sarah Angstman, live in a house next to the Kuskokwim River with their dogs and cat. He enjoys reading, writing, cooking, eating, going on canoe trips, and engaging in many of the subsistence activities offered by the abundant Yukon-Kuskokwim delta region. Ben supports the mission of 49 Writers because he knows firsthand “how much (49 Writers) programs can mean to individual readers and writers…The pandemic-driven push to Zoom has democratized access to readings and classes, and people in Bethel are excited. I’d like to help 49 Writers capitalize on that excitement and reach some unheard voices in Bethel, the region, and the rest of the state.” 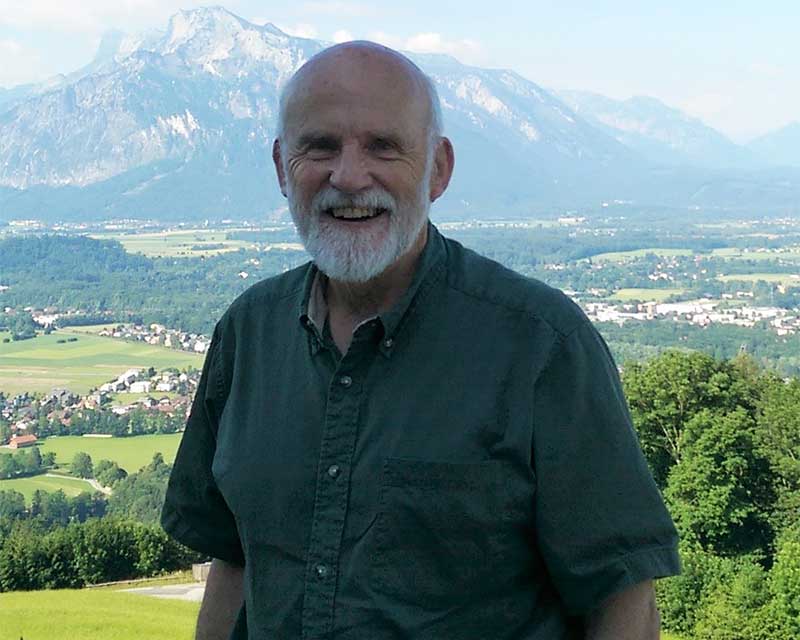 Board Member | Cordova
Ron Andersen retired from the Cordova School District and ADF&G on June 1, 2019. He has an ancient BS degree in Wildlife Management from University of Alaska Fairbanks. His adventurous life has led him down and up many paths, too many to mention here except for a few examples: owner of the Scandinavian Cellar and partner in Gate Five Chowder House in Fairbanks, biologist studying the Dall sheep along the proposed pipeline corridor on the north side of the Brooks Range, wilderness camp counselor and hunting guide in the Alaska Range, elementary school teacher and special education teacher’s aide, bush airfield project engineer, etc. He is currently writing a memoir about his life with a schizophrenic son who died of cocaine intoxication. Ron’s an old groupy of one who has caught up with his opera “girlfriend,” Kate Lindsey, a mezzo soprano, the catalyst for much of his travels to places like Seattle, Los Angeles, DC, New York, London, and Prague. Ron also serves on the board of Cordova Arts and Pageants. Now that he is retired, he plans to write much more steadily, read, and finally use his loom that has been sitting in his living room waiting patiently to get warped for almost three years. He plans to live out his life in Cordova, write until the end.

Board Member | Homer
Mary Katzke first moved to Alaska in 1979 and stayed until 1988 when she went back to graduate school at NYU’s Tisch School of the Arts for her MFA in Writing and Directing. She worked for several years before returning to Alaska with her toddler son, Corin, in 2001. She has produced over 40 documentary films and has penned around a dozen screenplays. She self-published her first novel, One Good Man, in 2020 which she completed during the pandemic. Mary currently lives in Homer after sending her adult son off to college on the East Coast. 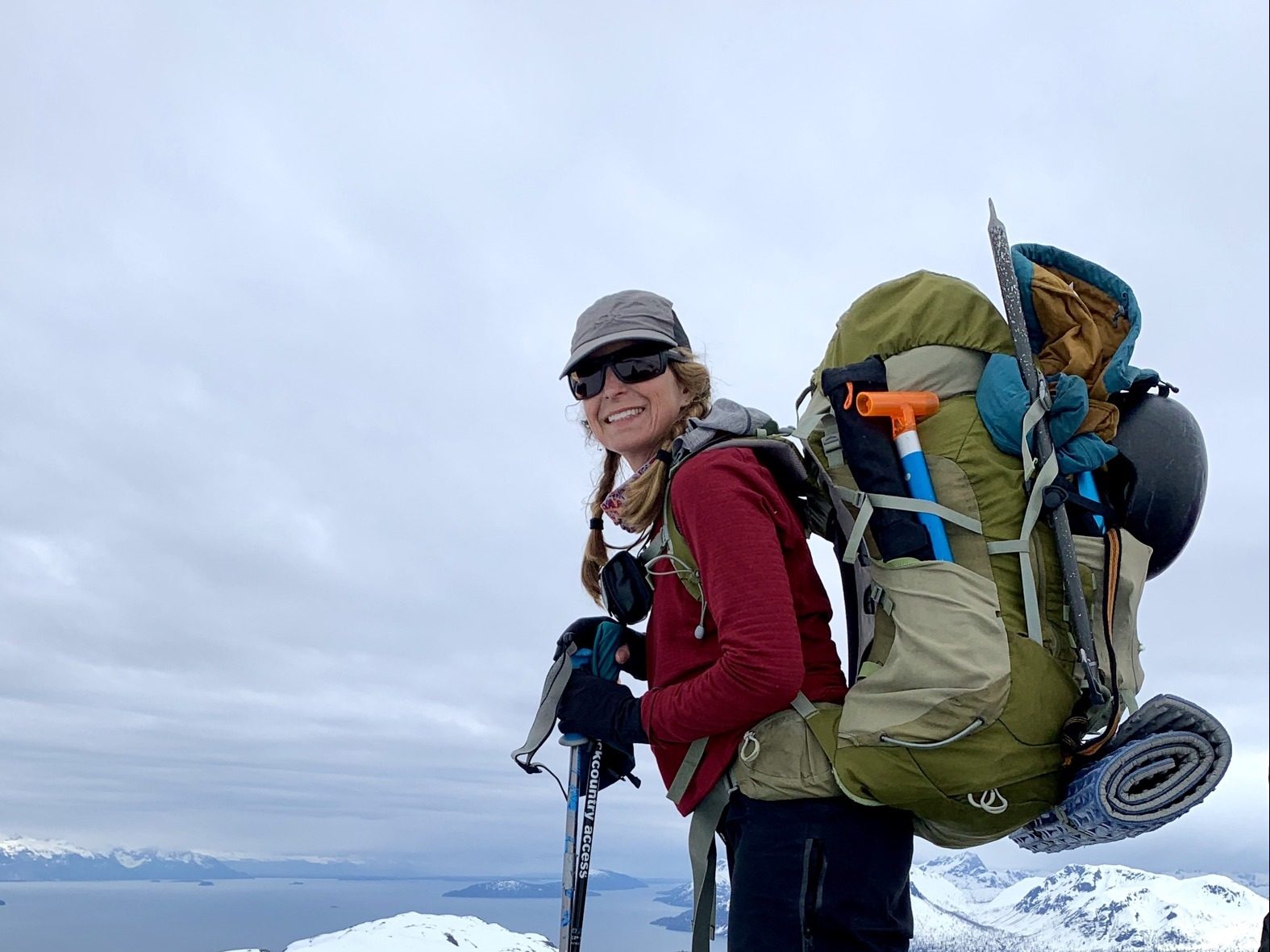 Board Member | Anchorage
Caroline Van Hemert is an adventurer, wildlife biologist, and author of the award-winning memoir The Sun is a Compass. Her work has been featured in the New York Times, Washington Post, Audubon, Outside, and Vogue. As a lifelong Alaskan, her professional and personal passions are closely tied to northern landscapes. In addition to freelance writing, she works as a research biologist studying avian ecology and wildlife health in the Arctic. When she’s not traveling, she divides her time between a remote off-the-grid cabin in southeast Alaska and a cozy home in downtown Anchorage, where she lives with her husband and two young sons. 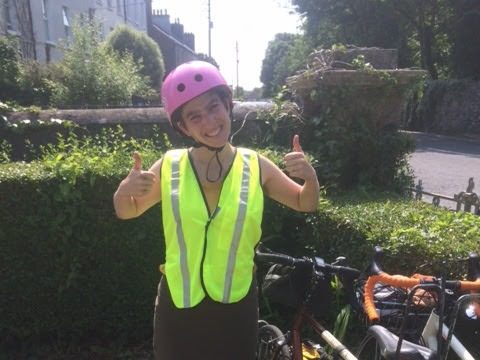 Membership & Program Coordinator | Anchorage
Makenzie Rose was born and raised in Anchorage and, after spending several years in Sitka, she, her husband, Simon, and two-year-old daughter, Hava, have returned to Southcentral. Makenzie supports 49 Writers because she loves the readings, classes, and workshops they put on and believes that a vibrant literary community is one of the things that makes Alaska such an incredible place to live. 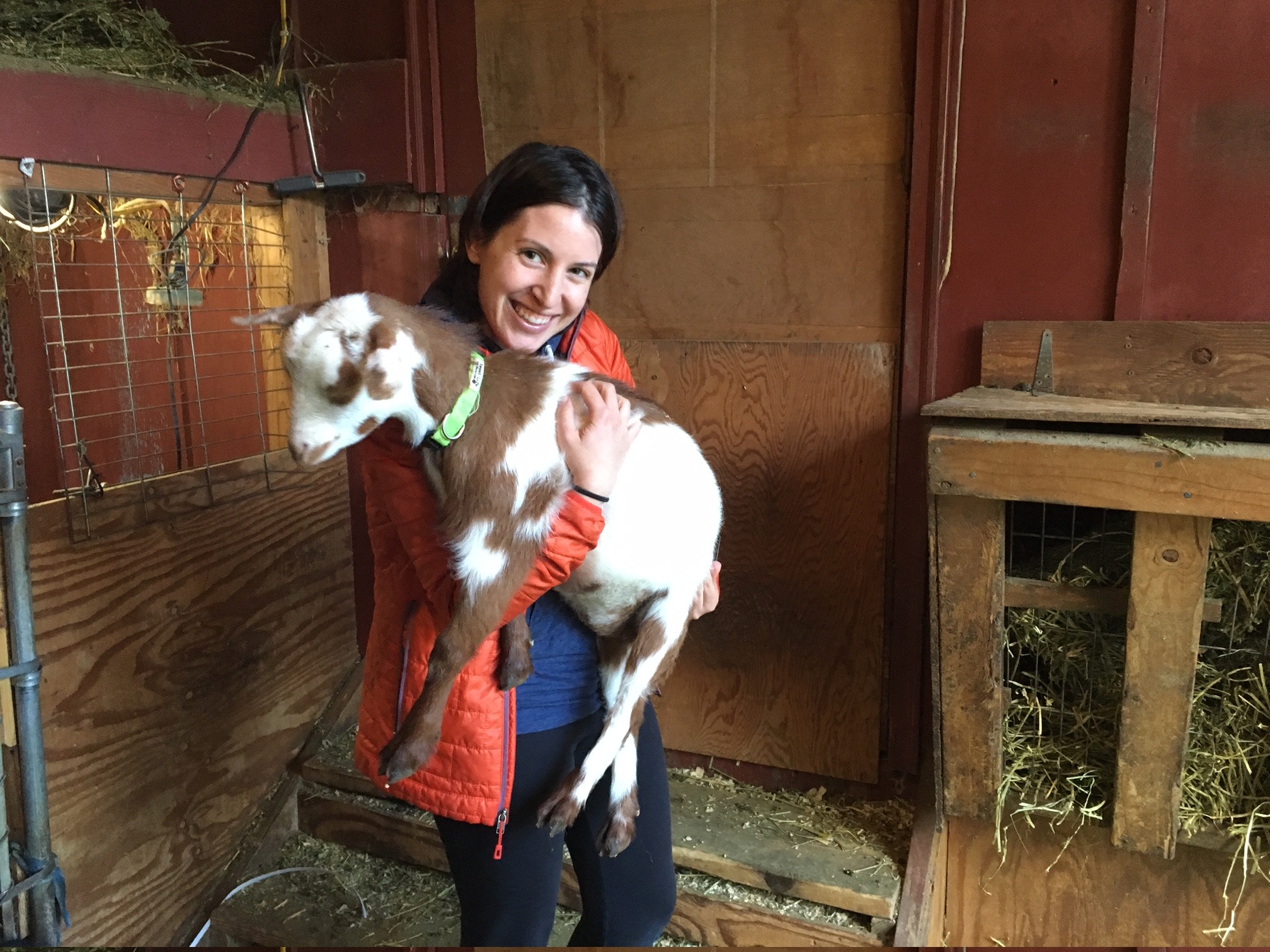 Communications Coordinator | Anchorage
Kristen Ritter is a writer and playwright whose work has been supported by the Alaska State Council on the Arts, the Kennedy Center, the U.S. Department of State Innovation Station, and Theater Alaska. She supports 49 Writers because she wants to provide resources and opportunities to artists across the state!

Past Board and Staff Members